In this guide, we are going to be showing you black flame bushido build which is a deck's faith build at level 150 in Elden Ring and it's a combination between the blazing bushido build and the black flame spellblade build. If you've been wondering how to play a faith samurai, then read on to find out! 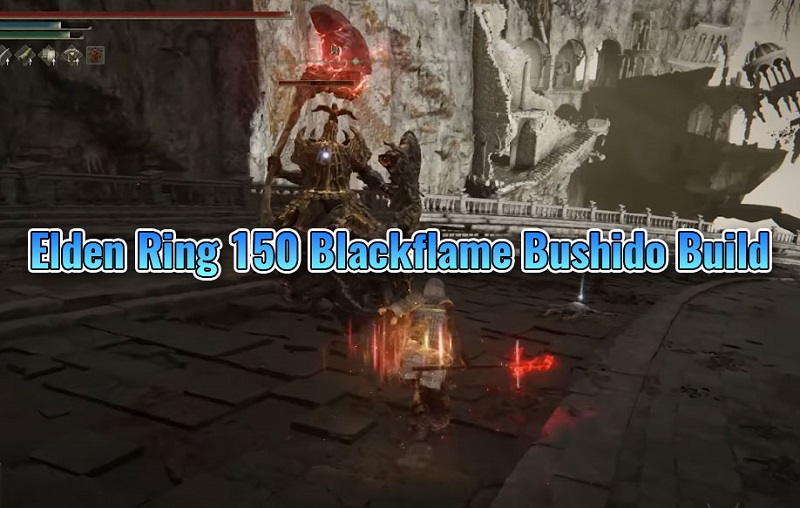 Using the Cross Naginata weapon, it has bleeding intrinsically which works really well with blood flame blade. And in order to use phantom slash, you need to use a pull arm type weapon or a twin blade in order to use that ability. Phantom slash is extremely deadly essentially, what it does is it shoots a phantom forward that charges and attacks, then you charge an attack and then follow up with a phantom slash and then do another follow-up yourself. This gives you four hits in the space of a couple seconds and they hit markedly harder than your regular attacks do. Additionally, if you're buffed with something like black flame blade or if you're buffed with blood flame blade, the phantom will also use that buff on the target that it's attacking.

You could also use the Nagakiba for this build, but you won't be able to use phantom slash and you would be better off using something like double slash or sword dance if you want to use that instead. For the seal we use for this build is the god slayer seal, the buffs black flame incantations.

Running on it is a must for this build and that's because we have the keen affinity set on the Naginata, and the reason for that is because if we don't and we put it on something like flame art even though its base damage is higher, we won't be able to buff it with blood flame or black flame blade. So we have to keep it on keen and that makes the damage a little bit lower and so that means we have to invest very heavily into dexterity in order to keep our damage respectable and that doesn't leave us up with a lot of points between dexterity and faith to put in these other stats like vigor and endurance and mind that we really need. So having that allows us to free up 20 points we can use for those things.

It increases phantom slash's damage by 15%, you will use this regularly, it only costs eight fp to use, if you only use it once and then the follow-up is another 8 fp which you'll use on boss fights. But regular enemies you can usually kill in one l2, so for 8ft you get a kill and getting that extra 15% damage ensures that you can usually get that kill in one use which saves a lot of fp.

It is there because scouring black flame. Black flame and black flame ritual are all chargeable and you will use them when you charge them more than anything, you don't have a ton of fb with this build, you don't use ranged attacks all that often but when you do you want them to go as far as possible and usually charging them extends that or increases the damage, you're getting your best bang for your buck when you're charging them.

This is a great shield talisman, this reduces the physical damage you take substantially and because you have Radagon’s Soreseal, this is going to be increased, this will help offset that somewhat. A lot of times when you're using phantom slash you are going to trade damage and because the attack still fires off anyway, it's really good to treat damage, because you usually come out on the winning side of that if you can keep spamming it because eventually you'll trigger a blood loss or you'll stagger the enemy and then you'll just be able to keep going into your l2.

Golden vowel increases your overall damage by 15, this includes your weapon skills, regular attacks, spells and it also increases your defense which we need in order to withstand attacks. Blood flame blade is there to put fire damage on your weapon, you'll get a decent amount with it because you have pretty good incantation scaling coming from faith and it also increases your bleed build up a little bit and allows it to continue building up or at least not falling off after you've attacked with a weapon that sets builds up bleeding status bar which is the Naginata in this case. And it's really good because when you're using it with phantom slash, it's also applying it with each attack, so it's kind of win-win.

Black Flame Blade is really strong with this build because you have so much incantation scaling from faith that adds a good amount of fire damage to each of your attacks, and it's really strong against enemies that are resistant to bleed or immune to bleed and you'll probably want to use it in those scenarios or when you're co-opting or when bosses have huge health pools and they don't bleed.

Scouring black flame is your aoe ability in front of you and it hits like pretty hard, it's not like the hardest hitting spell ever, but it has a pretty good radius for fanning and it can be hard sometimes to hit enemies properly with it because it likes to go up or go down depending on the slope of the terrain that you're fighting on. But if you learn to use this properly, it can wipe out packs of enemies in one cast and it's really good to have a ranged option.

Black flame is a great ranged option for this level 150 blackflame bushido build and you can charge it for extra damage, this spell has been buffed as has scouring black flame and black flame ritual with patch 1.04. So these are a lot stronger now than they were before.

Black flame ritual’s fp cost was reduced its recovery time in the patch. What to do with this is charging it up and casting it and waiting for enemies to walk into it. Bosses are generally pretty aggressive and they'll just walk right into this if you cast it early and then you can get some phantom slashes on them fairly easily while they're inside that fire being staggered by it or taking damage from it which works really well. Additionally, it's super strong against really big enemies like dragons and the fire giant.

Black flames protection is there to give you increased physical protection. You're going to be trading damage and this will allow you to use golden valves well together so you can get your physical resistance up fairly high with this and that'll allow you to use phantom slash without worry.