This page includes the new rune words from Diablo 2 Resurrected patch 2.4. You will find the runes necessary to obtain the D2R ladder runewords, as well as the effects and benefits that they can give you.

Diablo 2 Resurrected Patch 2.4 is in development and things can still evolve. This page will be updated as the new rune words are discovered.

30% better chance of getting magic items 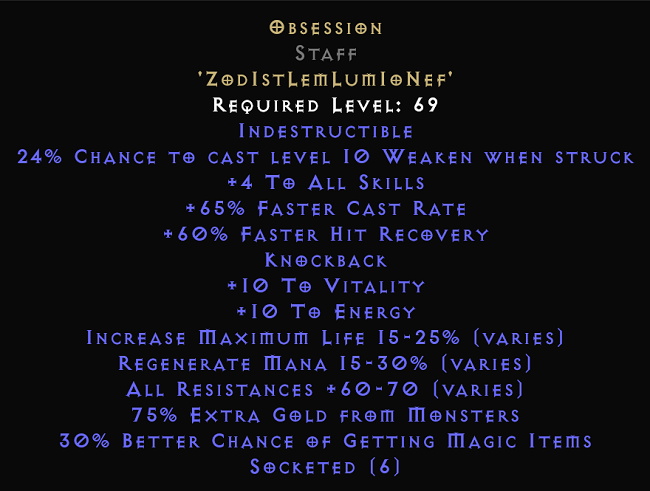 The new Runeword Obsession includes the rarest Rune Zod, making it very difficult to obtain. This rune increases the requirement for this rune word to level 69. Several bonuses make the staff rune word very valuable, especially for the sorceress. But possession is also interesting for some necromancer and druid builds. Again, since it has no auras, it's not quite as useful for mercenaries.

25% to cast a level 15 Poison Nova spell on strike

+37% Mortal Blows (based on character level) 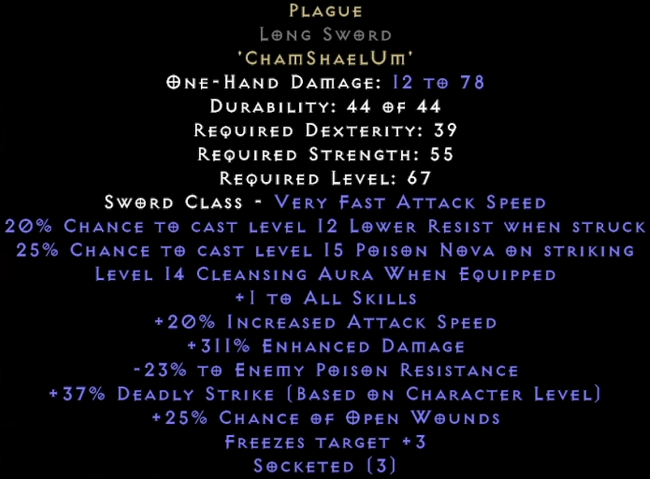 On an act 5 mercenary for a character that mainly does poison damage, because, for fire, cold and lightning Infinity is better. For a poison necro, you might as well launch lower resist yourself and take another weapon from the mercenary. So it can be interesting for druid, assassin, and amazon. There remains the possibility of equipping it on your character, to see the other supports available. 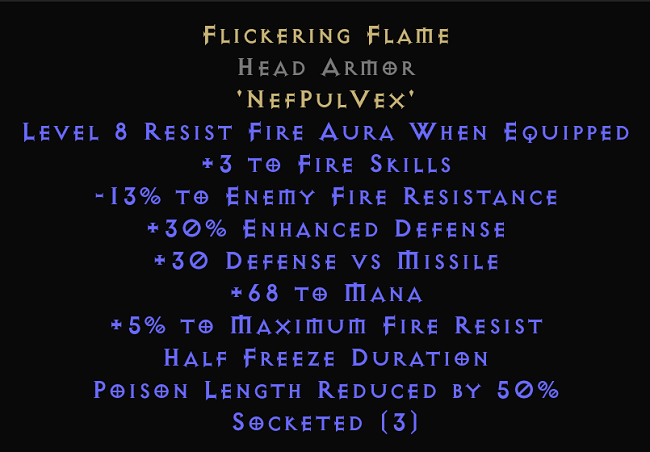 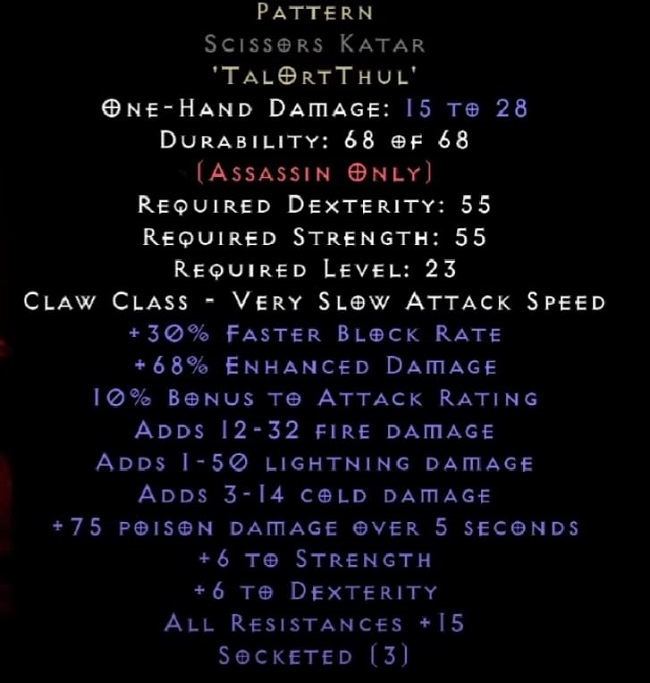 Pattern is a revived rune word that was mentioned during the 2.4 reveal stream, but it was also around in the early days, and as guessed it's a fairly modified version of the old pattern rune word with a slightly higher cost than before. It now sits with the runes: Tal, Ort, and Thul, and looks like it maintained most of the base stats of the old pattern with attack rating stats and resist all, but tacks on a bit more varied elemental damage albeit at the cost of slightly lowered elemental damage at least upfront. It includes a block rate modifier which could be useful as far as the uses for putting it on a low-level fury sin but it will generally be fairly quickly outclassed by rune words like Black for that purpose which are slightly more expansive. 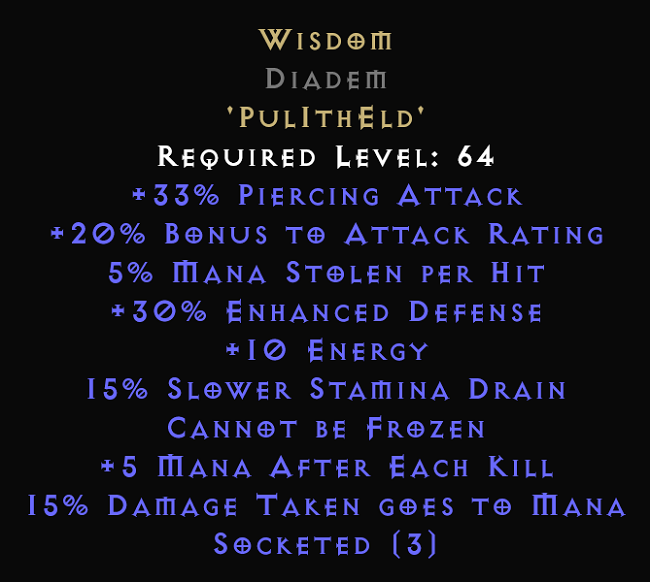 Wisdom is the more speculative one, and also the only non-weapon rune word of the bunch and appears to be a helmet-specific rune word geared towards ranged characters such as the bowazon, though it does pack a number of interesting mods for the 2.4 rogue as well. The two major factors are the supposed 33% piercing attack modifier allowing you to pierce through targets, as well as the cannot be frozen which could be desirable with shift 2 including the area of effect attacks on the rogue for example. The other modifiers on wisdom are fairly standard with a boost to attack rating, mana leech, energy, and mana per kill, as well as the basic modifiers from runes Pul, Ith and Eld. This helmet is not terrible for the cost in its specific use cases and what likely won't see as much use as helmets like Griffin's or Harlequin's Crest, it still has a decent amount of utility options, especially considering some of the plan changes to mercenaries as well as characters such as the amazon in 2.4. 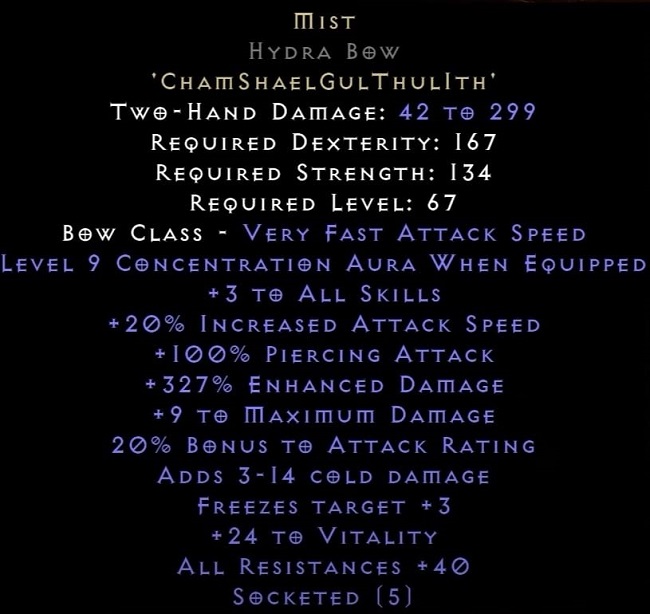 Mist is a bow rune word with some interesting modifiers that make it seem like a fairly nice option for a blazon, even if it feels like a confused competitor for Faith. Costing Cham, Shale, Gul, Thul, and Ith, it is a bit more on the pricey side, though does have the advantage of not overlapping with an Enigma in the high runes. The more we look at it the more it looks like it was geared towards the mage zone, since it packs a higher plus skill value guaranteed piercing and ingrained freeze target, with some physical support for the bow in the form of concentration, enhanced damage, and attack rating, which are important for maintaining your mana if you remember to grab leech sources from somewhere else. A high mana per kill would be preferable because you can't always leech. The other modifiers are pretty good as well especially the resist all, so it's going to be a good bow albeit pretty expensive. Putting this on a rogue mercenary for use with a strafer provided the 2.4 buffs to the mercenaries are good enough to justify it.

18% chance to cast a Taunt spell on strike

+1 to Circle of Light

-20% to the required conditions 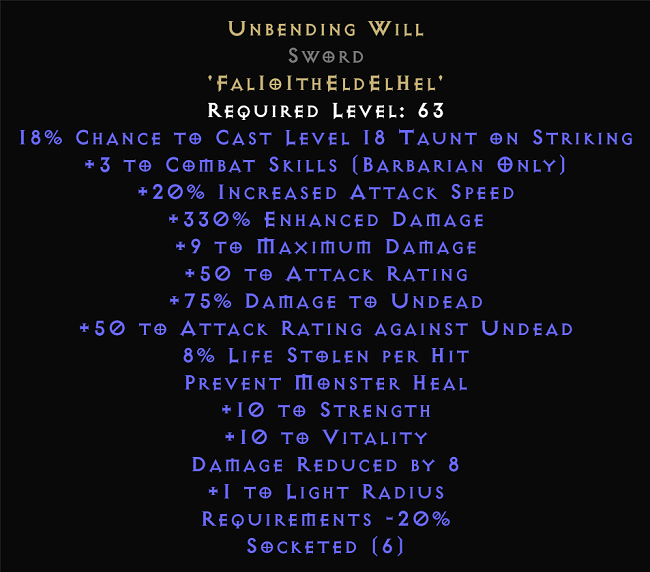 Unbending Will is a sword-specific rune word that requires six runes (Fal, Io, Ith, Eld, El, Hel), which sits in the realm of being a potential budget weapon for barbarians players or NPC, and has some interesting mechanics for the cost. Though the one most people latch on to is the 330 enhanced damage which is fairly high. Though this could be variable if it matches the design philosophies of other weapon rune words, all we have to go on is the 330 percent. With a lot of the stat attack rating damage modifiers, it will be a good mid-tier weapon and the inclusion of taunt makes it feel almost mercenary designed with the announced plan changes to the act 5 mercenary in 2.4. All around the decent damage life leech and what was mentioned it will be basically a really solid weapon albeit with one major drawback: the six socket requirement, this limits it to crystal dimensional and phase blades for one-handers as well as great swords executioners and colossus blades for two-handers. This means you will be very limited in your options with it and will make finding an appropriate base for it possibly take a little bit longer or even long enough that you will get access to something better unless you're very unlucky.