A new Ladder runeword - Plague has been revealed in Diablo 2 Resurrected. We are so excited to see more of what Diablo 2: Resurrected has in store for us in patch 2.4, and this runeword in particular. In this Diablo 2 Resurrected Plague 2.4 runeword guide, we tell you the attributes, pros, and how to make and use this D2R Plague Ladder Runeword. 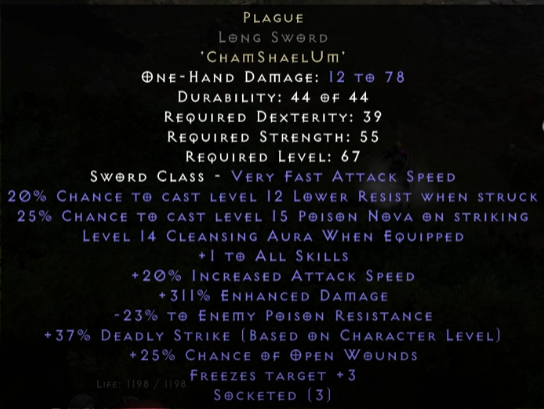 The revamped Diablo 2 Resurrected 2.4 Plague Ladder Runeword comes from courtesy of tricks. Plague like the Pattern runeword is also one that was originally in the D2 Lord of Destruction game files but was previously unused. This is a three socket rune word that uses the runes Cham, Shael, and Um. And it only appears to be usable in swords. It is a cheap option for Infinity. Plague could be a good weapon to fight the ubers with.

+37% Deadly Strike (Based On Character Level)

How To Get D2R 2.4 Plague Ladder Runeword

In order to make a Plague runeword in Diablo 2 Resurrected, you'll need a Cham Shael and Um rune. Out of those runes, Cham is the highest rune out of the three. You'll find Cham in hell, so this means that it's a later game runeword and it's only placed in swords.

When struck you have a 20 chance to cast level 12 low res on an enemy. This is nice and should take off their immunities, so you can kill enemies quicker. When you're striking an enemy there's a 25 chance to cast level 15 poison nova. The lower reds with poison ova is a nice little combination to do a bit extra damage.

This runeword also gives a level 14 to cleanse to the aura. This is useful when you are cursed it takes the curses off faster or the poison. D2R Plague Ladder only runeword also gives plus 1 to all skills and 20% increased attack speed. At the same time, the Plague runeword 311% enhanced damage as well as negative 23% enemy poison resistance. You also get a deadly strike percentage but that percentage is based on your character's level.

A 25% chance of open wounds is pretty crazy. If you're a melee character, this weapon will shred and it'll be a good option once you get to hell and find a Cham rune. Attacking someone will also freeze them for 3seconds this can be useful for when you want some crowd control and you want to freeze the enemies in front of you. If you end up doing that you'll take a lot less damage.

How To Use Runeword Plague In Diablo 2 Resurrected

Diablo 2 Plague Ladder Runeword will be good to put on a mercenary and walking around with the cleansing aura would be really nice. You can put this runeword on an act 5 mercenary that's because when he gets hit, there's a chance to proc the lower resistance on the enemy. This could be used as maybe a cheap infinity because it could take off immunities on enemies that you're fighting. But that's only if it procs which is when your mercenary would get stuck, so that could be an interesting way to use this Diablo 2 Resurrected Patch 2.4 runeword.