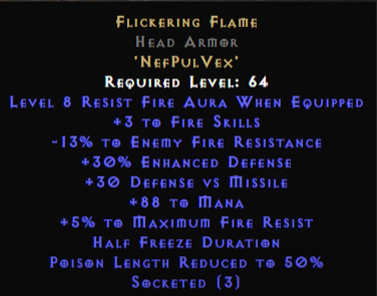 Flickering Flame is a valuable D2R 2.4 Ladder only runeword for helmets. It can be rolled in helmets for a Nef, Pul, and Vex. The truth is there are not really a lot of good Helmets in the game. Do you actually use Lore playthroughs? Maybe Nadir? Delirium can be used on mercenaries for crowd control and it is used on some builds actually on your main setup, but not really too often. And there's always the Dream Bone Visage. Besides that, there are not really a lot of choices compared to melee weapons or body armor. Therefore, Flicking Flame is an important Patch 2.4 runeword in Diablo 2 Resurrected. Nef, Pul, Vex it's not too expensive either. Though it does require a high rune, for the stats that you get actually think it's worth it.

The key standard here is 3 to 5 skills with the potential of rolling it in a drupal base. 4 plus 6 resist fire aura. Never having to worry about fires and the negative fires 88 to mana and plus 5 to maximum fire resistance. This is a very solid Diablo 2 new Ladder Runeword for any fire damage-dealing character. Then let's break down the main stats on this D2R Flickering Flame runeword:

Level 8 resist fire is 106 resistance to fire. So if you were to use this on a fire sorceress, fire druid, or fire bowa, you do not have to worry about fire resistance between torch annie the resist fire on this helmet and maybe like laying hands, you will have 75% fire as in hell. Actually, you'll have 80, because you get max fires. So that you will have completely no issues with fires at all. Fires counteract the lack of fire resistance on the Spirit as well. Instead of trying to stack some extra fire small charms or maybe elders boots depending on the gear and what character. To be frank, 106 fire resist is pretty huge.

Now for a fire sorceress or fire bowa that is going to be more damaged than Shako. Obviously, you don't have the damage reduction plus life mana and magic resistance that Shako has. But 3 fire skills are pretty neat. Let's take Druid Pelts for example. If you were to find a 3 to the volcano, 3 to fisher, 3 to armageddon drupal, and then you roll Flickering Flame. That's plus 6 to the volcano and plus 6 to armageddon. Now is that going to be more damage than Ravenlor.  Ravenlor is more negative fires and you can get up to plus 6 skills and multiple different skills.

The rumored card showed a range value of negative 10 to negative 15. So you could reroll this multiple times to try and get a perfect roll.

The enhanced defense is from the Pul rune.

The defense versus missile is from the Nef Rune

88 to mana is pretty nice. Take fire sources, for example, if you're using Shako, there are a lot of mana and a lot of plus life. You're not getting the plus life damage reduction in mf. But the plus 88 to mana does counteract that.

Fire resist that is from the Vex rune. So depending on the build, you should have no problem getting 85 res and the two most important right you want to make sure you have capped in Diablo 2 is lightning and fire, so that's a cool stat.

Fire sorcerer's fire traps in and a fire druid doesn't care if they're frozen. Fire bowa will care if it's frozen but it will most likely be using raven frost. So it's kind of like a useless stat.

Flickering Flame is a great helmet and it's potentially meta-shifting for fire builds unless you want magic find for Shako. But in general, fire builds just struggle because of hard immunities in the game. There are typically a lot of ways to get around it with other builds. The fire just in most cases really sucks until you unlock Infinity and at that point, you already have end game gear, it's kind of that paradox of grinding forever to get a character that can then grind a very few select areas because of fire immunity.

How To Use D2R 2.4 Flickering Flame Ladder Rune

1. A niche case used for Diablo 2 Resurrected Ladder Only Runeword Flickering Flame is an act 3 fire mercenary. They did hint during the dev stream on substantially buffing their damage and having them use the more powerful attacks more frequently. So with a fire mark for example, instead of using useless inferno, he'll cast fireball more often. The reason why Flickering Flame was designed for the act 3 fire mercenary is that you have griffins for an act 3 lightning mercenary, you have night wings for an act 3 cold mercenary, so this Diablo 2 Ladder Season 1 runeword will probably pair okay with an act 3 fire mercenary if they substantially buff the damage. If they don't provide auras to these mercenaries, they're not going to be chosen over an act 2 mercenary. Holy freezing might is just too powerful.

2. There are only a few niche case scenarios where mercenaries might be good if they substantially buff the damage and provide an aura. That would be potential with a tesla in setup or an oregon setup. The only reason to suggest these two characters is that if you wanted to rock an act 3 fire mercenary, there's just so much fire immunity that regardless of having insane damage, you're not really going to do a lot. But a tesla and an origin depending on how you spec the build. Typically rock a level 25 conviction or provide a negative 150% resistance and since you're largely relying on elemental damage with those two builds, you don't really use the standard kind of reaper's toll mercenary setup. So you could maybe get away with an act 3 mercenary if it's casting.

There's a handful of areas in Diablo 2 Resurrected that have good monster density, have no fire immunity, very select-fire immunes, you can farm without Infinity. Tristram in act 1, Tal Rasha Tomb in act 2, and the Stony Tomb in act 2 which are three great candidates among some other areas will provide fire builds an opportunity to farm.

People are maybe potentially not seeing the true value of this helmet. As a matter of fact, Flickering Flame is one of the best new Ladder only Runewords in Diablo 2 Resurrected. If you are looking for the best place to buy D2R Ladder Items and Runewords, Utplay.com would be the safest online store!