Diablo 2 Resurrected Patch 2.4 soon will bring back the functionality according to Blizzard. We have heard about the shared stash, the auto gold pickup, and some other features. However, one of the most exciting things we are praying for with D2R Ladder Season 1 has finally been answered. That is a lot of runewords in a single player. Now, new rune words coming up for the new D2R 2.4 patch. Let's sneak peek at the new rune words in Diablo 2 Resurrected Ladder Season 2022, we introduce to you the new D2R patch 2.4 runeword Mist, Wisdom, Unbending Will and more.

Around January or February of the year 2022, you may expect to see the Ladder Season in Diablo 2 Resurrected. Diablo 2 Resurrected Ladder is a competitive multiplayer game that takes place in a confined environment. As a player, you must create a character solely for the purpose of climbing the Ladder. This character cannot interact with non-Ladder characters and vice versa.

The first Diablo 2 Resurrected Ladder only runeword is going to be in a hydro bow and this rune word is Mist. This takes five runes to include Cham, Shale, Gul, Thul, and Ith. This one has up to 299 max damage, it's 327 enhanced damage. That's an incredibly odd number if they pick that to be the exact role that it gets every single time. This is probably within some kind of a range really hard to say what it would be 300 to 350 maybe it rolls 300 to 330 and Mist is pretty close to perfect.

Another thing that obviously is not going to get overlooked is that aura you can put this bow on your act one mercenary. Let's say, your barbarian you want to put out more damage or whatever character you want. You can put this concentration or a bow on your act one mercenary and then you'll get it so then that is incredible. Not to mention that this obviously you could be used on your Bowazon with other stuff on it.

Plus three to all skills that boost up every single D2R item in the entire game. All it takes for high runes is a cham and a mid rune of a goal. Concentration aura and three all skills are starting off pretty impressive on this D2R Patch 2.4 rune word.  With a 100% chance to pierce, you never have to put any points into that passive magic tree if you have this bow equipped on your Bowazon. You don't need to put a razor tail on or anything in order to get yourself pierced on your Bowazon.

This reward also provides 327 enhanced damage, 9 to maximum damage 20 percent to a bonus to attack rating. It's got cold damage and freezes target, so that way you'll always be chilling everything out. You don't have to find some other form of freezing target or cold damage in order to slow down the monsters that you're attacking.

24 to vitality obviously getting more life is never a bad thing and the plus 40 to all res. Both of the 24 vitality and the 40 to all resistance are really important on a bow specifically more than any other type of weapon. Because when you got a bow you have to have your arrows on the other side, you can't have your bow and then have a shield whether you're a paladin or a barbarian.

You could have a sword and another sword or a sword and a shield that way you get your resistance, vitality, or protection from blocking. When you have a bow, you don't have any of those all resistances that are on a spirit shield or anything like that. Therefore, all res on a bow is essentially mandatory. 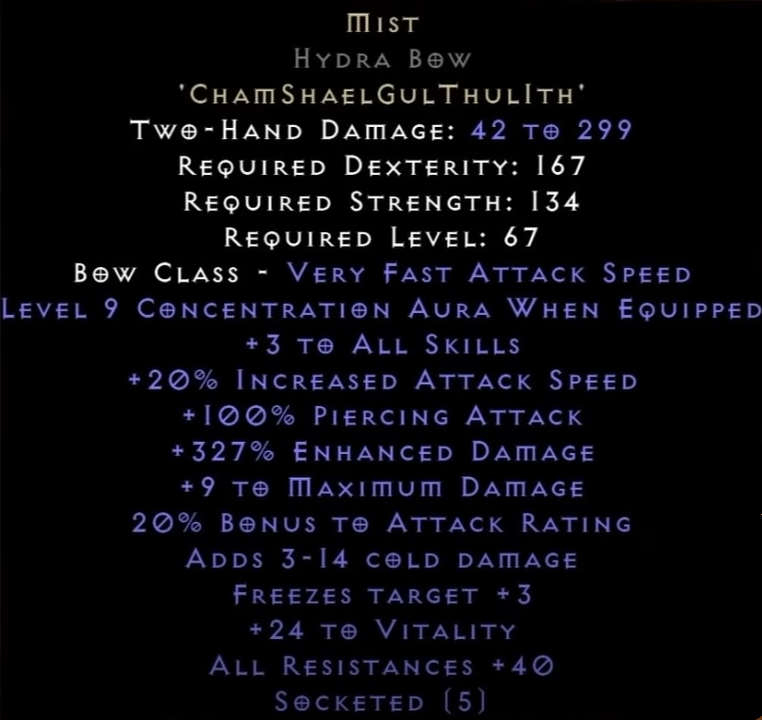 How To Use D2R Ladder Runeword Mist

So you want the act one mercenary behind you shooting the bow, that way you wouldn't need infinity because you don't need that minus enemy resistances you get from the conviction. However, this bow appears to be tailored for the act one mercenary to be used to help out the melee characters such as frenzy barbarians, whirlwind barbarians, and more. It definitely could be used on the Bowazon as well.

Diablo 2 Resurrected patch 2.4 runeword Wisdom in a diadem. This must be a helm-only rune word that takes a Pul, Ith, and Eld. You get 33 chance pierce, 20 to attack rating mana leech, a little extra defense, and 10 energy. Slower stamina drain which is pointless and worthless. Cannot be frozen is nice. Plus 5 after each kill and 15% of damage taken goes to mana. It only takes a Pul is the highest one. So it's a Pul and then two throwaway runes that take to make it. 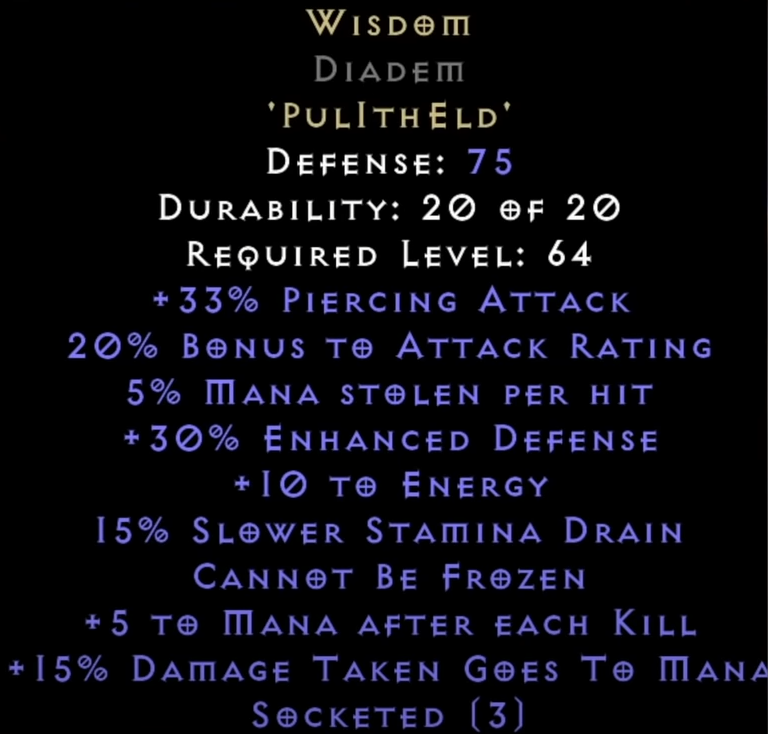 How To Use D2R Ladder Runeword Wisdom

You can use the Wisdom D2R 2.4 Patch runeword on Bowazon or Javazon because of its piercing attack. Or a barb because you would use pierce on that. But beyond, there’s no use for this particular word.

Unbending Will is a 6 socket sword D24 ladder only runeword which means it will only be able to be created in phase blades and colossus blades. It's made of Fal, Io, Ith, Eld, El, and Hel. The highest run in this recipe is the Fal which is 41. It's relatively cheap as well. Phase blades are extremely fast weapons and it also has 20 bonuses to increase attack speed on them. Taunt is a reduction in the monster's attack and the monster's damage. Depending on the level of taunt, it will reduce the damage and attack rating equally.

This Diablo 2 Resurrected patch 2.4 ladder runeword has a level 18 taunt not only with an 18% chance to cast but also with a 39% monster's damage decrease. If a monster has 100 damage, you are going to reduce them to 60. If you tag Unbending Will along with something that has high defense, the reduction in attack rating is also going to stack with the high defense and make it very difficult for the monsters to even connect a hit at all on your mercenary.

They also put plus 3 to combat skills specifically, because barbarian merc has access to 2 combat skills, one bash the other one is stun. Bash is a knockback ability and stun is exactly like its stats. As we know after the Diablo 2.4 patch, barbarian merc also is going to have the access to war cry. With this runeword, we also have a 20% increased attack speed, which is great especially since you are going to be putting this in a colossus blade or phase blade to speed him up considerably. 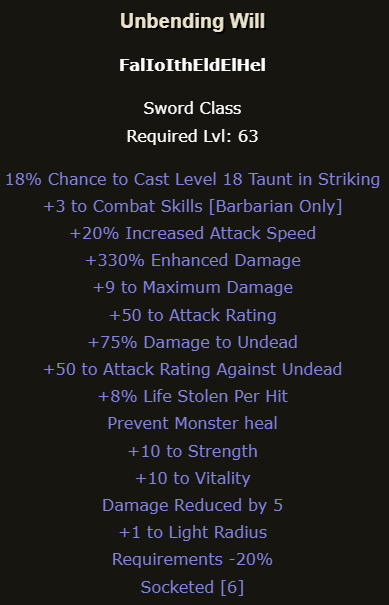 How To Use D2R Ladder Runeword Unbending Will