Since the addition of NBA 2K21 Glitch Market and packs in MyTEAM mode, it’s still not very clear about how to unlock Glitched Market in 2K21 fast. Now, some people have been able to get into the Glitch Market and they were actually able to get Frank Ntilikina and a few other cards that you can go, such as Tacko Falls, some people see it more than twice, but not the same rewards, some people don’t even see the market. How does it actually work? Follow us to explore the secret to get the 2K21 Glitched Market. 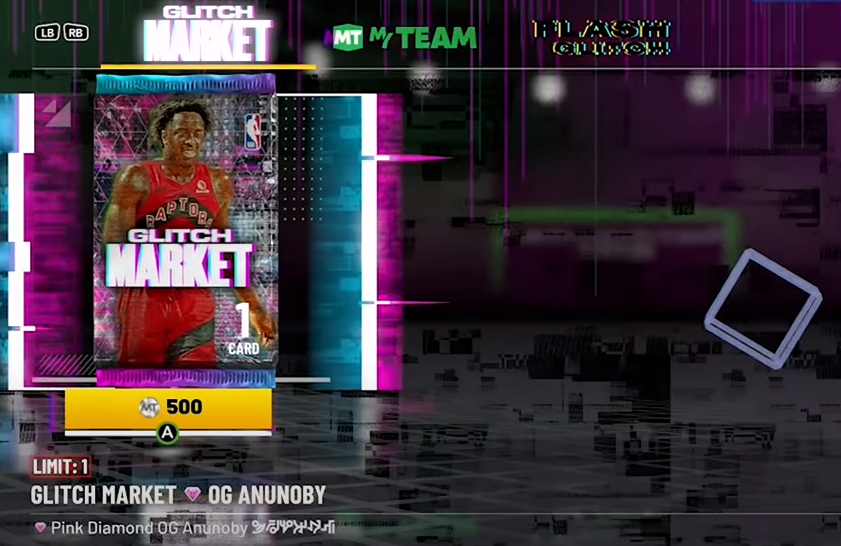 When you unlock it successfully, a ball will drop from the game you win and pop up to hit the prize you will get. You may get 1 pink diamond card, 1 diamond shoe, and glitched packs. The first glitch market pack that costs 500 MT may give you a pink diamond glitched OG Anunoby, Myles Turner, Frank, or others, the second thing you can have is a diamond shoe pack that requires 24 tokens. You don’t have to choose one of them to buy. You can buy everything, but there is a purchase limit on the player and shoe, there isn’t a purchase limit on the flash glitch packs. This means you can only buy 1 card, 1 shoe, but you can buy as many glitched packs as you want. It is not guaranteed but every single time you open the pack, you can open it with NBA 2K21 MT and when you open the pack you actually were able to get any glitch player cards in the game, then how to get into Glitched Market in 2K21? Here we collected some possible ways that can make you open the market, all of these methods have ever worked for different players.

1. The first thing you can do is to play the Triple Threat Online game and win the game. You may get into the market even with only several games completed and won.

The main thing you should do is to play the game literally, just play your Mystery Domination, Triple Threat, if you are still trying to do Spotlit Sim, go ahead and do that, do your Moments challenges, Signature challenges, Weekly Challenges, play unlimited and limited, there is a chance possibly after limited, you’ll be able to get it. But do not overdo it for yourself.

So far, it seems that opening the Glitch Market involves taking a chance. Luck plays a part in it. But one player's luck does not affect another player's luck. This is a suggestion, don't expect too much of it, don't even think that the glitch market exists, just play normally like your past seasons. Keep a relaxed attitude.