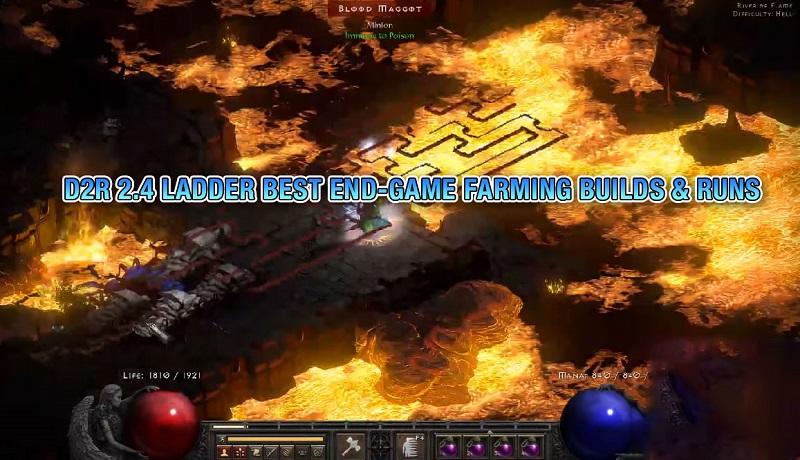 This is a high level zone level 84, meaning you can farm almost every Diablo 2 items. However, the monsters here will be much more challenging than in mid-game runs, they have more life and more resistances, because of that you really do need an enigma and infinity to be efficient. The reason to farm here is because, assuming you're strong enough to farm this zone, you have a direct waypoint in act 4 straight to the city of the damned, so you don't have to find this zone you are instantly there. Those other places you are wasting time locating them. Tow this area is a massive square map and you'll mainly be hunting elite packs, you'll run into a lot of immune monsters, lighting immunity is a particularly big problem. An infinity can help with that but it won't be enough for some monsters. If you are a pure lightning build, this run is not recommended, cold immunity is also a problem here, but it's not so bad. However, if you do see cold immune spawn, just mulligan the run leave the game try again on a fresh run. Since your main reason for farming this zone will be to find super high level unique and set items, you'll want to maximize your magic find, but don't sacrifice too much kill speed or survivability or your efficiency will drop. A very rare map tile sometimes spawns in here it's a cathedral with stained glass windows. If you happen to see this area, it always has an elite pack inside.

Best end-game farming builds for each class in City of the Damned:

Best end-game farming builds for each class in River of Flame:

This is the best place to farm in Diablo 2 ladder start. Between all the bosses you run into here plus Diablo himself, you can farm large amounts of unique and set items, runes item bases and as a bonus experience too. Also Diablo is the only monster in the game who can drop the burning essence of terror which is one of the four essences you need to make a token of absolution to respect your character. Even if you don't use it yourself, you can use it as a trade currency with other players. However, this is one of the most challenging runs in the game. If you're under geared and lacking resistances especially fire resistance and lacking overall damage output, this area will kick your butt to access it, take the river flame waypoint and head over the bridge to the northeast.

The final traditional farming run before patch 2.4 was the world stone keep and bale, this is the most challenging farm in the game but it can also be the most rewarding. Between the large number of elite packs, you run into on worldstone keeps level 2 and 3 plus the throne room, plus bale himself, you get a large amount of xp, unique set runes and item bases. Elites in this area can drop every set and unique item in the game. If you're hunting for runes and bases you ideally want to farm in a seven player game player seven and you don't need magic fine either to hunt for runes and bases, do kill all elites and their minions. If you want magic items, then stack magic find and play on players 1 and only kill the main boss of an elite pack, so that you can guarantee a drop and then move on to the next pack. You could also just rush to the throne of destruction if you have the mobility for it and prioritize killing the waves that bale spawns and then bale himself. This strategy is the most efficient way to get to level 95 and above.

New to patch 2.4, we have another late game farm the icy cellar. As the patch 2.4, this is an area level 85 zone meaning any item can now drop in here. This place lacks fire immunes but extremely dangerous monsters can still spawn here, souls and dolls. An the plus side though ghosts also spawn here which are a great source of rune drops. You can also run into evil urns which when you click on them will spawn extra elite packs. You can also find a gold chest in here plus the super unique boss snap chip shatter. Compared to other max level zones like the pit and ancient tunnels, the danger is much higher, you need a well-rounded build with mobility damage and magic find to be efficient, enigma and infinity are very important. To find the icy seller, take the ancients way waypoint in act 5.

You'll run into monsters in the icy cellar with a variety of immunities but none naturally have magic or fire immunity. Apart from builds that use specific damage types, hybrid builds are the best here to be able to handle the various immunities if you're a lightning build you're going to have trouble here without an infinity. If you're a physical build, you'll have trouble breaking physical immunities without a source of amplified damage or decrepify. Now your main reason for farming the icy cellar is for the super high level unique and set items. So ensure you stack as much magic find as you can handle. Don't sacrifice too much, kill speed or survivability, but this is a very small area with a high density of elite groups, so it's a nice farm if you can handle it. If you don’t have very high end gear, we do not recommend farming this zone.

The other new Diablo 2 ladder starter farming zone the drifter cavern very similar to the icy seller, you can find ghosts here as well, you'll find evil learns, they can spawn more elite packs, it has a gold chest in it and again as the batch 2.4 it is a level 85 area. So any item can drop here. Moonlords are some of the most dangerous monsters here and again like the icy seller. You want a solid build mobility damage and magic find to be efficient in this zone, enigma, infinity very important. To get at the drifter cavern take the act 5 waypoint to the glacial trail and there's a map reading trick to find the correct direction to go in.

For build recommendations, hybrid damage builds are recommended to be able to handle the various immunities. Lighting immunes are the biggest problem if you lack infinity, maximizing your magic fine here to try to get those super high level unique and set items is ideal and the picks are the same as the icy sellers.