Before you build your character with the frenzy mercenary in Diablo 2 Resurrected 2.4, what do you need to understand first? And what weapons to use for the new Act 5 merc in D2? In this article, we’ll start with some tips for D2R 2.4 Act 5 Merc builds and more importantly, the best Act 5 mercenary weapons, runewords, and gear to use.

The Act 5 Mercenary has been updated in Diablo 2 Resurrected 2.4 Patch, and the frenzy merc is so godly in the game. Then what should you know about the Act 5 merc build gear?

The first thing to note is that when you have equipped a single weapon, it will use that weapon for both melee attacks and that damage is applied to both hands. However, technically that should be impossible since they only have one weapon equipped, and if you don't have a weapon equipped, you should only be getting the mercenary's base damage, every mercenary deal base damage even without a weapon, and then on top of that he would use his frenzy stacks, but he can frenzy without having a weapon equipped. Equipping a single weapon, he is also able to frenzy and it will use that weapon's damage in slots.

It's really important to note that something like Last Wish while they'll use the weapon base for the damage and theoretically for the chance to hit, it's not going to give you that double down of the might or you need to equip both weapons to get that double might aura, but you will have all of your chance to proc as if that weapon was equipped in both hands, you're actually getting the exact same chance to proc as if you had equipped two weapons. So if you're literally using only a Grief for pure DPS, you actually only need to equip a single Grief, you don't need to make a second one. This also means is that if you're rolling multiple Grief runewords and you get a higher damage version, putting that in the main hand and then not equipping second grief will actually net you more damage than it would put on weaker damage based Grief.

The act five mercenary actually has an inherent five percent chance to crit, the merc crit chance rolls completely separately from your base critical strike roll, you'll check deadly strike chance, if that fails you'll attempt to critically strike based on either weapon mastery, which you can now give to the mercenary or from giving them critical strike skill and then if you successfully crit, there you have a five percent chance to crit.

Let’s take a look at some viable options for the D2R Act 5 mercenary weapons and gear. Save yourself a lot of high-level Diablo 2 runes and make sure you are equipping the weapons that get you the maximum benefit of it.

This merc is going to include things that have auras or the chance to cast procs or just raw damage.

- Lawbringer (Phase Blade): this gives you to crepify the sanctuary or that’s going to increase your safety.

- Crescent Moon (Phase Blade): a cheap weapon that is going to give you static in an area.

- Last Wish (Phase Blade): life tap on striking, fade when struck, Might aura, and you can dual wield these for level 34 Might aura.

- Grief (Phase Blade): ultimate damage weapon for most builds and the Act 5 mercenary.

- Headstriker (Conquest Sword): this is pretty rare, but it provides the highest damage output for your mercenary, when it is equipped with a one-handed mercenary, the damage will be doubled. It is one of the best options for your mercenary because of all of the flat damage that he gets and the addition to the deadly strike. 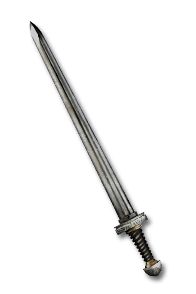 - Sazabi's Set: Individually, these D2R set items are not very good, but if you slap them all together, you get a pretty good set bonus. The good things that stand out here include 15% life stolen per hit, an increase in maximum life by 27%, all resistances +30, damage reduced by 16%, etc.