FIFA 22 defending tips revolve, there's so many unique scenarios every game that will give you here some very useful and good general FIFA 22 defending tricks to improve your FIFA 22 defending, the goals for both old-gen and new-gen even though defending on old Gen is a bit harder because the game is a bit more high paced and also since there are fewer animations, but the principles and concept are exactly the same on both versions. 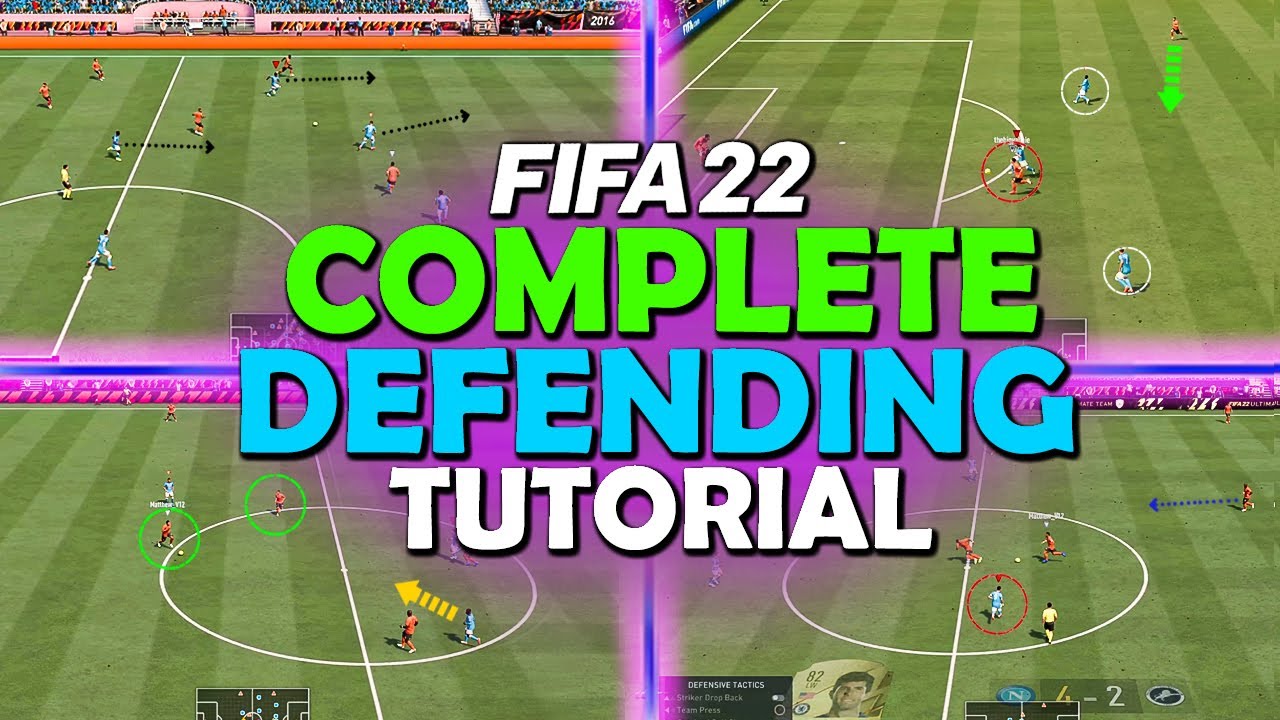 Before you can do anything make sure to cover through balls and this can be said one million times, people will still not care the first phase of your defense is to stop counter-attacks, here you must scan the pitch and see if there are any dangerous deep runs, if there are any threats you must right stick switch to the player that is the closest tattoo, there is a threat and manually cover off this run, and have around the 1-meter head start to make sure that you don't get beaten by a quaker attacker and only when this through ball threat is gone you can start to apply pressure play but the first phase of defending is to cover off and stop this through ball to every price.

The second phase of your defending is around your box, this is when your opponent has established an attack, here it is important that you always cut the passing lanes and to do. So you must identify the danger, this will very often be the pass into the box, you don't want the opponent inside there, you want to stop this pass, and it's usually best to use your midfielders for this task and leave your defenders in safe AI positions and when you cut off passing lanes, you should press down l2 or realty on Xbox for better reach and control of your player, but the big difference from v21 is that long shots are very dangerous as well, this means you can't just sit back and the capacitance, you must also apply pressure on the bone holder, the key is to always stay close to the ball holder, and the ready to launch towards him, if you notice that he's about to take a shot or starts to lose control of the ball, we stay close to the ball holder, but still cut past lanes and always use the opponent as a reference in our pressure play the most important thing in your defense is to not be too passive you want to always show presence and annoy your opponent, but without rushing and giving away free goals.

A massive key in the defense is to master the right stick switching,  this gives you an advantage over the opponent, as you can quickly close down gaps, and the most important thing is to scan the pitch and try to predict the opponent's next move with the right stick switch, you can pinpoint exactly which player you want to switch to and you can switch across big areas the second type of switching is l1 switching or lb on Xbox which will always switch to the player that stands the closest to the ball holder this one is good to use in more tight situations you, for example, defend in your box or on the flank a successful defender is using and mixing both types of switching techniques both right stick and the l1.

4. One v One defending

Switching time for one on one and in FIFA 22, there's very rarely need to use a stand tackle button, the key this year is once again to use the l2 jockey button or lt on Xbox, this gives you high control of the player, and will increase the player's defensive reach. What's important here in one on one is to not give the bottler too much space and time on the ball, the same as when cutting passing lanes, use a sprint button to approach the ball holder quickly, but just as get close slow down and press down the l2 button to increase the control. And start to move a bit backward, so as to not overrun if you notice that your opponent is on a very heavy touch, you can just keep running towards him and take the ball back, look at his touch if he's under control step back if he's on heavy touch then sting like a bee, a weaker player will keep on rushing towards the opponent, no matter what which will get him punished against the better players, so once again the key is to slow down and press down l2.

Jockey just before impact, if you notice that the opponent has a ball under control, but there are situations when it's good to use the stand tackle button, the first one is to get a bit extra length on your challenge, if you're lunging towards your opponent and you notice that your tackle needs a bit extra reach, the more you power up the challenge the longer reach those, as well the clumsier challenge around two bars is very often a sweet spot. The second situation when the stat tackle can be good use is to block shots, this simply gives your block a better reach, but ninety percent of all times, it is enough to just use the l2 button to take the ball back guess 10 tackles will injure will just make you more clumsy in the defense. So what about the slide tackles, they are the last resort, if you have no options left and you really cannot reach the ball in any other way, they give you by far the best reach, but also as well by four the biggest risk,  if you missed the challenge, there will be a huge gap in your defense opening up and very often, as well you will concede a goal after missing a slight tackle, the slide title is also as well less consistent in FIFA 22 than it was in FIFA 21.

Use it only in emergencies over to second man press which is a key feature this year, and should be used as much as possible, you always want to defend with support, this feature gives you this possibility when you press down r1 or rb on Xbox, you'll get the fancy support from one ai control player, a green marker will appear over that player's head second man press this year has massively improved compared to the last FIFA,  as the ai control player will stay tied into the ball holder and also as well sometimes to make tacos if he gets close to the opponent.

this is great to use to apply pressure play on the ball holder while you manually cut off the passing lanes, this feature should be used pretty much constantly around your box and in your pressure play, it will massively help you here, to defend successfully keepers or your last outpost and an important part of your defense, as well make sure to be active with the keeper both on shorts and on through balls.

So press and hold down the dragon button or why on Xbox to rush out of the goal to stop through balls, but also as well to narrow down the angle in a one-on-one situation keeper's side movement is equally important to move the keeper, you simply press down the right analog stick and moving towards your desired direction most times, the opponent will shoot towards the four-post, but the key is to not reveal your keeper movement too early, otherwise, you will get punished against an opponent with high composure and awareness move the keeper slightly at the moment before the shot advanced players, even movie keepers to stop dangerous crossing situations opportunities are plenty, but active goalkeeping will help you to concede fewer goals.