The new very loosely flag rumor that Diablo 2 runewords will be introduced in Diablo 2 Resurrected patch 2.4, now going to be entirely honest. But They kind of limited this reward making it swords only. To go over the cost of the attributes and a potential couple niche case uses for it. This Guide will share some attributes of plague runewords. 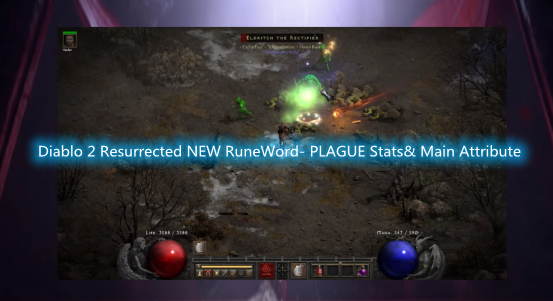 Why plague runewords are swords class only?

The rumored plague is a three-open socket rumor that requires a cham shale and um that can now only be rolled in swords, so this was changed from the original text coding. It was jam falam, so now it's a shale room which does give some extra increased stack speed that's going to be okay for some builds. The biggest mistake here with this rumored right off the bat is that it can only be rolled in swords. If it could have enrolled in all weapons or maybe claws swords and maces or something.

+ 37% Deadly strike ( based on character level)

A couple of other cool changes of Plague

There are a couple of other cool changes that they didn't introduce that may be offset a little bit, but the biggest mistake right off the bat is only being able to roll in swords.

Now the first major stat here is a 20 chance to cast level 12 low resistance when struck. So this provides you, it's negative 57 all res and at level 12, it's a pretty solid radius the big kicker here. Though it's when struck not when striking.

Curses an enemy to take more damage from all magical attacks

The next stat is a 25 chance to cast level 15 poison nova on striking, this is purely just style points even with the lower res and the additional negative poison reds on this rune board level 15 poison nova is nothing other than style points. It does look pretty cool 25 chance striking, it does proc all the time, but it's just really style points moving on to the level 14 cleansing order when equipped this is a pretty powerful aura to have on a room where it reduces the chance or sorry reduces the duration that you're cursed and how you're taking poison damage by 76. So in chaos sanctuary, you're not really going to be cursed very frequently if everything's cast on you, it's gone a couple of seconds, so it's very powerful there.

The major change that can be summarized here from the original plague is it now rolls a flat one to all skills as opposed to one to two why it was nerfed because it's that powerful of a rumor, so if you had that range of one to two again, it would be better in like claws and scepters.