In terms of Diablo 2 set item updates, Diablo 2 Patch 2.4 PTR is testing now, there are buffing and some of the underutilized sets, some base gear gets some torches or whatever. What are your thoughts on the new content in Diablo 2 patch 2.4? Do you want what change is it? Hope you can get some new ideas from this guide. 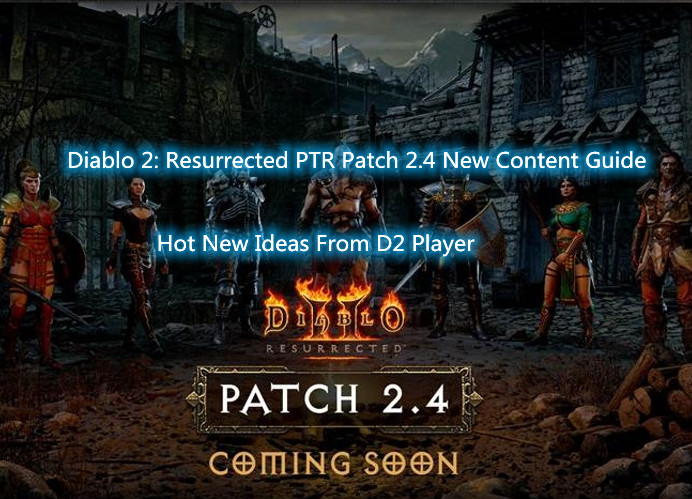 New level 85 areas coming to diablo 2. A lot of these areas that are selected again, the most popular targeted magic-finding areas are places that you can quickly locate, so the Fisto and Daryl's are not too bad. Some slack the pits Travian gold cast sanctuary, they're typically easy areas to locate right, so the idea of having the cavern or whatever the one that's next to the waypoint.

If you can target find them, farm them and get to them quickly Diablo 2 PTR patch 2.4, look at some of the monster resistances, but hope some of these areas they're targeting it'd be cool. If they are targeted more towards characters that already have limited farming areas, like fire sorceresses, fire druids like it'd be cool if one of the ice caves, it's is it the icy cellar is level 83, and it has no fire means, the drifter cavern is level 84, but it has some fire men's. If there will be increase in 85 areas, which will be cool!

It would be amazing to have a Diablo 2 Resurrected currency tab! A currency tab similar to the path of exile, the additional stash tabs to accumulate more garbage, like perfect amethyst ralvaroons and jewels for crafting costumes.

Gem and rune stacking saves a lot of space and will be the biggest QOL improvement so far. Yours chipped all the way up to your perfect, your individual jewels, your organs, your keys, and then everything you just control-click, and then it stacks. It's not like it's similar to stacking in pd2, where you can just stack a stack of runes, but that rune stays static.

A change for diablo clone dropping a rare consumable that you like, something like chamroon rarity, then you consume it, it teleports you to like an upside-down zone like stranger things, like a chaos sanctuary that doesn't have an exit that you can only leave again. If you open a TP but then you can't go back again, just have it be like cool upside down, like a crazy smoke, whatever diablo battle that reduces, whole like super annoying finding targeted, like mast selling SOJS using a third-party program to figure out what your IP address is cycling games to find a specific address everybody's on the same address selling all the SOJS that's supreme.

Shaking the meta, Blizzard made a lot of adjustments to make a lot more other lesser-used skills viable, but in terms of like what they suggested with the shape-shifting skill example or shape-shifting tree example for the druid freeing up synergies, making other builds like a little bit stronger like.

You're gonna end up with a fury druid, a fire claw variant, a mall variant, and potentially rabies, all the existing stuff is there, there's more potential for variations in different. A lot of the stuff is there except for maybe some stuff like a volcano, druid flavors, those things will be very fresh, but a lot of like the original, like lightning fury jabs on that's all gonna be intact,

There is an auto-sort tab button in the last epoch where it just takes everything you have thrown in your inventory and you just tap the button, and it auto sorts, it for you kind of like Tetris, it just like rearranges everything to free up more space that would be grim dawn has that too okay.

When you open your inventory and you have like a bunch of potions everywhere and you have like a couple of small empty slots but you want to quickly make four instead of moving everything around like hit a button oh wait console has a sort button that's right oh my god okay thank you for a community that is playing on console.

First of all, some new uniques would be really cool the same way that they added plague and pattern into the game because those D2R rune birds exist in the game files, it would be cool to see them introduce.

A lot of people think they're OP Herman's sprocket or merman sprocket whatever it is those exist in the coding as well. It's will be cool the same way they did it with room words, they could do it with uniques, so they're buffing some underutilized sets, it would be cool down the road. If they buff some underutilized uniques, they alluded to it that it's not on the table right now, but it's not off the table.

Stash tab to mass dump diablo 2 runes, gems keys, and organs would be perfect if they made the Diablo 2  items 1 to 2 squares as in d3 that would help limit the fullness of the stash as well

Drops should be players three default players one make them p3 default, so you can still get higher experience and higher drop rates on regular monsters if you play in a player's eighth groups, but if you do solo bringing it to players three makes it not as painful for hiring farming.

A p3 flat baseline regardless of the player's difficulty setting is a good way to make it players 2 by default all that does genius is give you more experience, it goes one three-five, and seven for reducing the no drop rate kinda.

A loop filter, do you want to own it? Blizzard already preparing to change current situations. They do if they do plan on doing it, so they've been talking about it and if they do plan on implementing it, they want to do it properly because so many times some of the loot clutter on like high like D2R players count bail runs and stuff. At least they're looking into it, and they want to build it in a proper way.