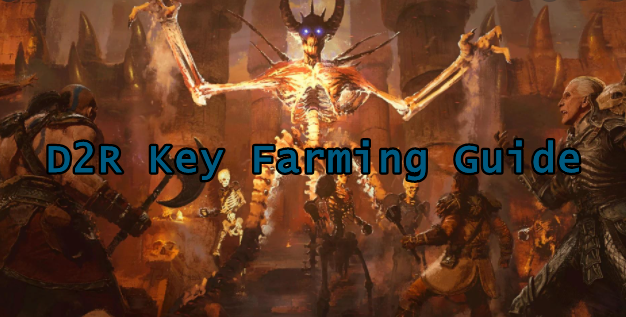 Using a very traditional blizzard build, a pure cold build to farm keys in Diablo 2 Resurrected. Maxed out a blizzard, maxed out synergies, the appropriate number of points in cold mastery. There's nothing special with gear, a Shako, Oculus Vipermagi, normal Spirit Monarch, and Magefist are all your need. But, the biggest thing here is the faster cast rate. It's really important to hit those breakpoints. In this case, you are shooting for breaking the 105 percent faster cast rate breakpoint. That makes your teleporting so much faster.  It's really great from a defensive perspective, as well.

You're going to get hit a lot less as you're teleporting and you're going to save a ton of time. It's really about efficiency when you're doing Diablo 2 keys farms. Magic find does not increase the drops of keys. The Diablo 2 Resurrected key drop rate is based purely on the number of players in the game. The best thing you can do is run more of a defensive build.  It doesn't take a lot of great gear to be a good key farmer using your cold sorceress. Next, we are looking into the best key farming spots D2R.

Key Of Terror: The Countess

We're going to start in Act 1 and we're going to farm the Countess. She can be found in the Black Marsh and she is in the Forgotten Tower. You've got teleport around the Black Marsh. You got to get down to cellar level 5. Now, the big trick with the Tower is that you're always going to want to turn left. When you enter each level, you kind of turn shield side is a way that people like to refer to that. You want to turn left from the exit of the tile that you come in on. She's cold immune, remember, so you let your merc go to business.

Key Of Hate: The Summoner

Head over to Act 2 and we're going to target the Summoner. The Summoner is in the Arcane Sanctuary. There is no map trick here. You've got 4 directions. You just gotta go until you find them. So, teleport your way through the Arcane Sanctuary till you find them. A great hint here is when you get to these dead ends, you take a few seconds and you pop these chests. These are super chests. They're going to have some really great odds of, in a relative sense, dropping some decent gear, Diablo 2 Resurrected items, runes, and things like that. You're going to want to carry around some keys to be able to unlock them.  It's worth popping those really quick on your way teleporting through.

Nihlathak's going to be in Act 5, Halls of Pain. With Diablo II: Resurrected, you can get that waypoint safely without losing out on your portal to Pindleskin. When you get to the Halls of Pain, there are only three map layouts and they are fixed. There are only three patterns that you have to worry about. When you do enter Halls of Vaught, there are some indicators as to which direction Nihlathak is going to be. You're going to want to look at a few specific tiles. If they have these creepy eyeball paintings on them, they'll tell you whether Nihlathak's in that direction. Once you find them that means Nihlathak is down in this bottom right section. Furthermore, there are other tiles that indicate the upper right or upper left.

Then you are going to teleport down. Right-back next to Nihlathak. You're used to seeing the corpse explosion on all of his minions, blowing people up.  That's where being a cold sors is actually going to be to our benefit.  We're not going to be able to damage any of his minions and so they're not going to die. Then you are going to teleport down, throw a blizzard right on top of Nihlathak. He'll die really quick and you can see whether or not he dropped a key. If he did drop a key, you just jump in there. Teleport in, grab the key, teleport out, and head back to town.

Something that you will need for a Diablo 2 Resurrected key farm as a cold sorceress is a decent mercenary. Now, for your merc, use a traditional Nightmare Act 2 mercenary.

For a weapon, use a regular Insight. Cheap D2R runeword which is both great damage, as well as you get the meditation aura which gives you back a ton of mana. So you won't have to worry about mana pots when you're teleporting all over the place.

We want to have a helmet that's going to have life leach. The easiest one to do is grab a Tal Rasha's helm. There are lots of other good options. This is a really budget build here,  but the merc is still solid.

You're going to need the mercenary to kill cold immunes,  which most importantly for the key farm, is going to be the Countess who is always cold immune.

That's the key farming for Diablo 2 Resurrected. It can be really fast and really efficient. You can do all three keys coming from Countess or Summoner or Nihlathak. You can work through all three of those bosses in just a few minutes and have a really efficient key farmer on your cold sorceress.