FIFA 22 Team of the Year (TOTY) is about to begin. At the end of January, we will see one of the best promos added to FIFA 22. What is exactly your official FIFA 22 TOTY vote? In this guide, we are going to show you how can you vote for your players to make the Year of the Year FIFA 22. 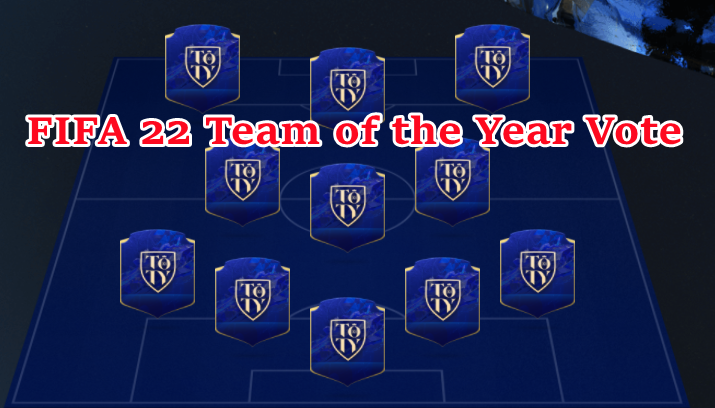 FIFA 22 TOTY promo is the biggest event in the FIFA Ultimate Team calendar. We are not just talking of being similar to the Team of the Week where they get increased by one or two ratings with certain individual stats also being boosted. With Team of the Year, they get boosted by over ratings of 5, even more, to take them to high rated 98 or 99 rated players. For those that start off having a relatively lower rated card, they still get into those mid-90s. With these types of players along with it comes an insane price tag. In previous years, these types of players have cost millions of FIFA 22 Coins. With that price tag connected to it, it always makes sense for you to prepare.

How To Vote For FIFA 22 TOTY Nominees

1. Go to the official FIFA 22 Team of the Year vote website.

3. Choose the 11 of your favorite players from Goalkeepers, Defenders, Midfielders, and Attackers. Drag their cards into the corresponding positions.

4. After you have decided All of your Team of the Year nominees FIFA 22, click submit vote.

Once you vote for FIFA 22 TOTY nominees, you need to prepare for the upcoming FIFA 22 Team of the Year event, you’d better save all the packs from Division Rivals, Fut Champions, Squad Battles, and Squad Builder Challenges. Once FIFA 22 TOTY promo is released that’s when you open them all.