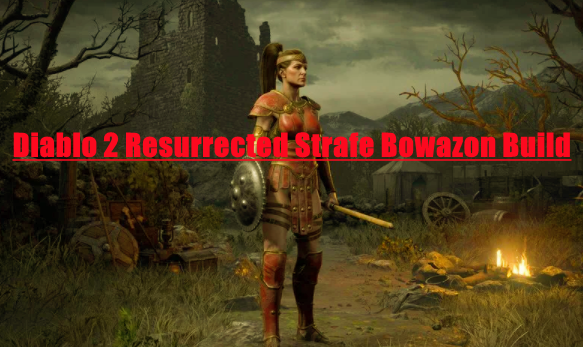 The introduction of "strategy" skill is to make the launched arrow automatically split the attack and aim at several nearby enemies. The damage of arrows will increase with the improvement of skill level. The maximum target that can be attacked is 10 arrows (but each additional companion nearby will increase by 1 arrow. The companion refers to mercenaries, Valkyrie and decoy, so the actual maximum is 13 arrows) and can trigger passive mod, For example, smashing blow (charged bolt), dead strike (double damage), knockback, enhanced damage (physical Immune), etc.

Each time you cast this skill, only one arrow is consumed, but the character cannot move at this time. If you are a player who is not skilled enough, try to learn to properly control the brush monster distance. As a crispy class, it is still very dangerous to rush into the monster pile.

Select bow and crossbow of the main "strand" play method. It can be seen that the output skill bonus of this skill is not much (unlike the ice method, which can improve the "blizzard" skill and several related skills of damage). Therefore, the skill points of the bow and crossbow are relatively abundant, so the "strand" skill must be full. Then select the passive skills to improve the physical output in turn, for example, "Double strike", "penetrate", "pierce".

These three passive skills "penetrate" need to be full and can provide a large number of physical attack hit rates (physics classes need this mod very much. No matter how powerful your attack is, it's useless if you can't hit the monster! Many bow and crossbow who pursue limit output in the later stage will even be specially equipped with a fire-enhanced mage).

The attack effect of "pierce" means that there is a chance that the monster pierce will continue to attack the target behind, but even if there are many skill points invested in this skill, it is difficult to achieve a 100% impale effect on the skill. Therefore, both bow and crossbow highly recommend choosing unique items "razortail" (also known as impale belt, with 33% impale chance), "pierce" Add a little skill, and then rely on the improvement of equipment to reach level 9 (level 8 is only 65%, while level 9 is 69%), which can just add up to 100% of the total impale attack effect.

In addition, "Valkyrie" is recognized as a very powerful summon by Diablo 2. It can not only improve the output of "strafe" (as mentioned earlier, when there are companions nearby, increase the number of arrows) but also serve as a solid meat shield for crispy bowazon. Of course, when the skill level is high enough, the output can not be ignored. There is no need to think about filling it up decisively. Only 1 point is added to the relevant passing skills.

The mod addition of bow and crossbow can be said to be extremely monotonous. There are already "decoy" and "Valkyrie" and mercenaries as meat shields, which makes bow and crossbow not need to develop too much in terms of meat. At the same time, bow and crossbow is a real long-range high damage physics class. As long as the brush monster is a little careful, it is difficult to be close to the monster, and then rely on equipment or The bonus of "combat system" skills (Barbarian skills, the effect is to increase the upper limit of life, which can be given by Barbarian or "warry" in the language of perfect Topaz) is enough to ensure survivability.

Then the specific mod bonus points are: strength is added to the equipment, and the rest are all Dexterity (pursue the limit bonus points of high damage, and the blood provided by the equipment and small charm in the backpack is high enough). Players with poor equipment should give an appropriate point in physical strength, combined with the equipment blood to reach 1000, and finally all the remaining points are dexterity.

Cloth: perfect Topaz's language "Fortitude", which is a necessary armor for hand-to-hand combat professionals. If No. 28 is available, it is recommended not to play bow and crossbow temporarily, otherwise, it will be difficult to have a good experience. Super poor players can choose perfect Topaz's language "Convention" (white 3-hole cloth, perfect Topaz sequence No. 13 + No. 10 + No. 20) , the ultra-high attack speed makes it easier to gather the attack speed gear and indirectly improve the output.

Necklace: unique items "Atma's Scarab", trigger curse "enhanced damage" to break the physical immune. If the attack speed gear is not enough, you can bring unique items "lightning fury". They are very practical and cheap necklaces, which are not difficult to brush

Rings: unique items "Raven frost" (which can be brushed by nightmares) are matched with gold life and mana rings (MOD requires leecher, mana, and dead strike, with dexterity, damage, and resistance mod better). Gold rings and other high-grade ones are not difficult to brush when gambling in stores

”Or "Dracul's grasp" + 9-ort + perfect sapphire + any perfect gem. It is recommended to make it when the character level is high, otherwise, it is difficult to wash out a good mod. Blue gloves can be bet in the store.

The formula for washing out these gloves is: blue quality "Sander's taboo" with "Inferno" (a low-cost shield attack on Paladin can challenge super 6boss, as described earlier) and "destruction", the backpack can appropriately bring some Diablo 2 Resurrected Runes and mod with passive skills as life, attack rating and "excellent life" with maximum damage In fact, Bowazon's equipment is not the most expensive. The real bowazon's charm is far more valuable than the equipment, such as + 3, maximum damage + 20, attack rating + 20, life's excellent life. Small charm is very difficult to brush without cheating. Qualified bowazon backpacks will be full of charms similar to mod in order to have higher output.

As mentioned above, "strafe" can shoot up to 13 arrows at all nearby monsters. However, if there is only one monster nearby (such as Belenus boss battle), all arrows will shoot at this monster, but not every arrow that hits will cause damage to the monster.

This is because a new concept (next hit delay) was introduced after version 1.10. The attack delay parameters corresponding to each kind of damage are also different. The parameter of "strafe" is 4f (frames), that is, the attack received in each 4f (frames) after the first injury is invalid. In Diablo 2 game, 1 second is 25F (frames) , the corresponding 1F is 0.04 seconds, which is related to many gears often mentioned by many players in the later stage.

Belenus receives 9F from 1arrows, and the damage is effective

Belenus suffers 15F (greater than 13F) from 3arrows, and the damage is effective

Belenus receives 21F (greater than 19F) from the 5th arrow, and the damage is effective

Belenus receives 27F (greater than 25F) from the 7th arrow, and the damage is effective

Belenus receives 30F from the 8th arrows, and the damage caused by attack delay is 31F (the last effective damage 27F + strafe attack delay 4F). The damage is invalid

Belenus receives 33F (greater than 31F) from the 9th arrow, and the damage is effective

Beelnus receives 36F from the 10th arrows, and the damage caused by attack delay is 37F (the last effective damage 33F + strafe attack delay 4F). The damage is invalid

Belenus receives 39F (greater than 37F) from the 11th arrow, and the damage is effective

Belenus receives 42F from the 12th arrows, and the damage caused by attack delay is 43F (the last effective damage 39F + strafe attack delay 4F). The damage is invalid

Belenus receives 45F (greater than 43F) from the 13th arrow, and the damage is effective

The whole process is 45F (1F is 0.04 seconds) for 1.8 seconds. Belenus can take up to 7 times of damage. Remember that the 10th arrows is followed by more 3arrows in the presence of mercenaries, female martial gods and bait. If none of the three are present, there will be less than 2 effective attacks. If one is missing (for example, many players forget to call bait), there will be less than 1 effective attack.