This is a technical Diablo 2 resurrected guide based on the ssbb (sword+shield barbarian) of the major WW (Whirlwind). Other types may also be referenced. ssbb is pk capable and PVC strong can solo (solo combat) any scenario, not afraid to damage-reduce. It can kill faster with the second set of weapons, the double sword, and the double ali88 for a high MF. 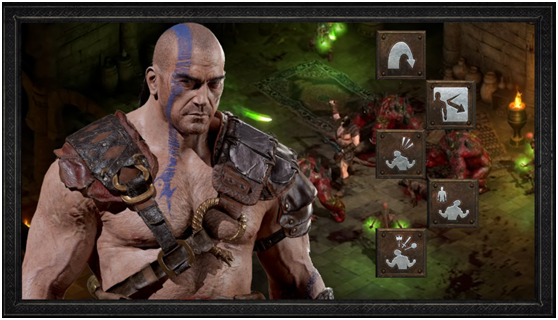 It works better on teams than iron skin, but the shortcoming is that the duration is too short. It is recommended to learn a few more, as it

A lot of bonuses to defense. Be diligent and roar a few times, you will benefit a lot.

All types of bb should be learned to full strength.

Use this skill before using bo or shout.

This skill increases the chance of finding an item from a corpse, and the quality of the item is determined by the MF value.

Act bosses such as Mephisto, diablo, and Baal do not have corpses, so this skill is most useful for flipping cattle corpses and pinning

The sword is the first choice for bb, because ccbq, because ali88 because it can also be used with a shield, there is a lot of room for development.

If you like pk, you can learn two more levels.

Learn this one too, it works when you forget to shout.

leap attack is good for running Mephisto and escaping.

Increases the number of strikes by 50% when using two swords.

A purely magical attack. Great against damage reduction, I've used this on a damage reduction +ML squad leader during run Baal; it's also the only way to fight when you're in the iron maiden and a must for bb against lord de sis in chaos.

The general rule is that str meets the equipment requirements and dex meets the blocking 75% (with the storm).

Here are the str and dex requirements for the common swords of the bb and the blocking method.

combined out of the ccbq has 3 holes, one of them set eth (this is a bug, use it can get 95% hit rate. However, there is news that Blizzard is going to fix this bug in 1.10, so you can't put eth here), and the other two holes can be set with an ohm or ed/max beads.

The speed of WW is better than adding 100ed.

It can only be used for one hole and has two settings: eth or ed/ias, the latter being recommended.

The speed is -10 and cannot be increased to the next gear no matter what. Set eth or ohm or ed/max.

Speed -30, has 20 ias itself, no need to speed up. Also has ITD, no need for eth. ed is not effective due to low base attack. Usually set with amn to increase leech.

Str also adds attack, so you don't have to regret adding more. It is recommended to add up to 189 so that you can use all your swords.

The dex mainly depends on the blocking of the storm. The formula is as follows.

Level 80 requires 182, level 90 requires 203. as some D2R items have to add dex (e.g. raven frost), depending on your situation, including items up to this requirement will be fine. Add all remaining points to vit, eng don't add.

um (4r 15) and ber (dr 7) are the preferred socket items for bb's hats and clothing, depending on the match. Depending on the fit. In the absence of these hats, you can use a tal mask to cover them.

If you can't get one of these swords at the moment, you can make an honor cs/cb to use first.

Note: Take a white cs/cb to the blacksmith and he will give you a 5 socket cs/6 socket cb.

P.S. The formula for combining swords

The inlay for a storm is nothing more than um or -req + another mod bead, for bb, there is no need for -req.

Shield at the low end: 4 socket shield(PD*4), good for 4r; Whitstan's Guard Round

Moser's Blessed Circle Round Shield (PD/um), a combination of 4r and blocking

No ire can be replaced by this: high def 4 hole armor(PT*4).

Belt: a string of ears

For these last five categories, it is best to have the following attributes: leech life, +str, +life, +skill, +res. The reason amulet doesn't use Highlord is that bb has 100% cs, so ds is ineffective against it.