People were crazy about new triple threat spotlight sims challenges and rewards in NBA 2K21, but which card that you are looking forward to getting the most in MyTEAM? Are dark matter Jimmy Butler, James Worthy or Bill Russel the best NBA 2K21 triple threat spotlight sims that you’ve been sweating for? Here at utplay.com, we break down the top 5 best Triple Treat Spotlight Sims cards in NBA 2K21 that are worth getting.

If you are only considering of complete one 2K21 TT Spotlight Sim Challenges, you’d better take into account whoever the top card is as well as the best set overall. It is obvious that James Worthy collection is NBA2K21 best Triple Threat Spotlight Sim set that you should get first in MyTEAM. On the on hand, this set features many overpowered players. Both Cowens and Cooper are very solid, Cowens can run the middle. Amar'e is okay, Jamal and Manu Ginobili can be your point guards for most of the year, furthermore, Manu is the best of all individual cards. As for Hal Greer, he is an overpowered card on current-gen. Bam Adebayo is one of the best power forward as well as a center you can get. Not to mention that James Worthy is not only the best of all the cards but also the best in terms of the cards in his center. Except for a few unusable cards like Bill Laimbeer, Steve Francis and Rodman. On the other hand, the best players in the James Worthy set are point guards and a center. Rewards including:

Invincible Bill Russel is the best card in triple threat spotlight sims right now, as well as the best in NBA 2K21. He is the best at the power forward position on current gen with six foot ten, seven foot four wingspan, and hot spots from everywhere. Features 61 hall of fame badges, showtime(HOF), range extender(HOF), hot zone hunter(HOF), catch and shoot(HOF), Corner Specialist(HOF), and more. Great stats he’s got 98 three ball, 99 driving dunk, 98 speed with ball, 99 ball handle, 99 speed, 99 acceleration and 99 lateral quickness. What makes him a demon is that he can curry escape on next gen. The best thing about him is he does have Ray Allen base on very quick, quick dribble style, pro 2 size up escape packages and pro 1 moving behind the back. Needless to say, Bill Russel is the best triple threat spotlight sim card in NBA 2K21. 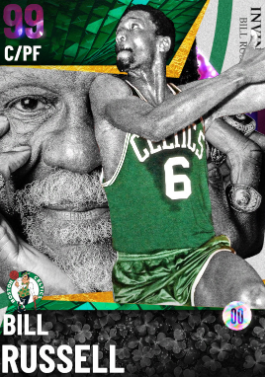 The second card that you should go first is dark matter James Worthy, he is the best triple threat spotlight sims NBA 2K21 among the three. He is six foot nine, seven foot wingspan with hot spots from everywhere. He has 49 hall of fame badges and 16 gold badges, including showtime(HOF), range extender(HOF), volume shooter(HOF), ankle breaker(HOF), quick first step(HOF), and defensively is going to beat people up. Moreover, he has 93 three ball, 95 driving dunk, 92 speed with ball, 88 ball handle, 94 speed, 94 acceleration, 95 lateral quickness and great rebounder. Tendency-wise is absolutely solid with Tony Parker’s base on very quick, shifty dribble style, pro 2 size up escape packages. Though he can’t curry on current gen, it’s no big deal. 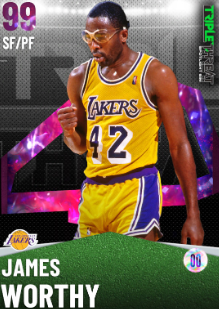 Jimmy Butler is the top 3 best 2K21 triple threat spotlight sim tier 3 reward, he is definitely one of the best shooting guards in NBA 2K21. He has 48 hall of fame badges and 20 gold badges, such as showtime(HOF), range extender(HOF), hot zone(HOF), Clamps(HOF). With 95 three ball, 95 driving dunk, 95 speed with ball, 92 ball handle, 96 speed, 96 acceleration, 96 strength,  99 lateral quickness and solid defense, his base jumpshot 22 on very quick, shifty dribble style. There are no flaws with Jimmy Butler except he’s only six foot seven. 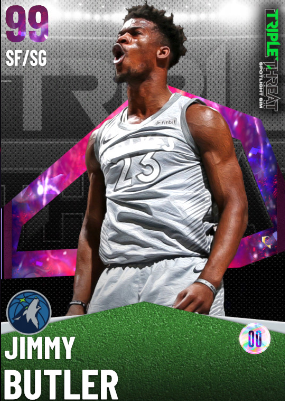 The reason why Manu Ginobili comes at no.4 best NBA 2K21 TT triple spotlight sims cards, due to the fact he is the best point guard in NBA 2K21, as well as one inch smaller than Luka Doncic, but he is a better version of Luka Doncic with hall of fame showtime and range extender. He has a lower base on Dante Exumon very quick, 95 three ball, 85 driving dunk, 96 speed with ball, 94 ball handle, 96 speed, 96 acceleration, 95 stamina and 96 lateral quickness. 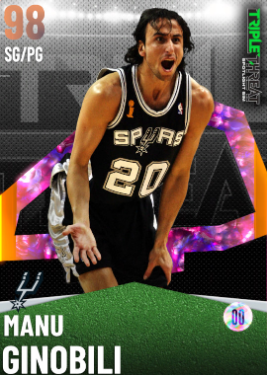 Stephen Jackson is six foot eight, six foot nine wingspan, has hot spot everywhere outside of that right slot and can curry slide. With 36 hall of fame badges and 16 gold badges, including range extender(HOF), catch and shoot(HOF), corner specialist(HOF), clamps(HOF), interceptor(HOF), 92 three ball, 95 driving dunk, 91 speed with ball, 91 ball handle, 94 speed and 92 lateral quickness. The only downside about this card lacks of showtime, you have to add it at least on gold to boost that up. Do you prefer Rudy Gay release or release 14? You can compare Christ Morris to Stephen Jackson, because they are very close cards with the same height and same stats, but he has hall of fame show time and hot spots from everywhere. Just choose them on your preference. 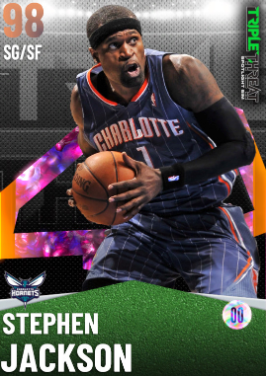