This is one of the hardest lists to make, there are so many good running back. But it's very top-heavy, a lot of players you see in the top five to six are the ones that most people are using. A lot of these other players are falling out. it's very top-heavy. Recently another top-heavy player got another upgrade as well so it's getting higher and higher up there.

We don't see much of Arian Foster in the game, a lot of people are running the same running backs because they know how good they truly are. but Arian Foster is very doable: 95 speed, 97 acceleration, 97 agility, pretty decent carry. 90 is a bit low for a 97 overall player. It should be a bit higher there. If you put a run on him, you could get the carry up or balance offense, you probably get up to a 92, but still not the highest. Catching is pretty good, at an 83 for an elusive back. 97 change of direction, the brake tackle is what carries him and the trucking is pretty decent. The brake tackling is everything, he’s a taller running back. In the passing game, he plays very well, despite not being the best actual pass catcher ever in real life. But the 83 catching compared with the six-foot-one is very good out of the backfield.

One of the most popular running backs to use in the game. Jim Thorpe has 95 base speed, 97 acceleration, so he can get up to that 96 base speed with the power-up, but it's still not 99, he can get you up to a 98 non-theme team. Good carrying at 95. The catching’s a bit low. Great change of direction, brake, tackle, and trucking. An all-around running back. powering him up and getting caught up is very good. He plays a lot better than his stats show, all those stats are very good. he plays very well on the field.

The thing with Bo Jackson is on a non-theme team, he is around position eight. But when you put him on a theme team, he could be very high with 99 speed. He has very good 95 speed, 96 acceleration, 94 agility, good carrying 93, change direction 94, trucking and brake tackle both out of 95. We all know how Bo Jackson truly plays on the field, he's been in the game for around three months now. He is one of the better cards in the game, we all love him, super fun to use. We're seeing a lot more cards start passing up, he is still easily a top 10 running back in this game though.

Another power back - six foot two, 83 catching, he can be a power back that can catch the ball, but a 95 base speed, 96 acceleration, 94 agility, carrying is at 97. Steven Jackson's not going to fumble for you, and his change directions in 93 and brake tackle are a bit higher than Bo Jackson and have the same trucking. Comes down to these players, he has a lot higher catching and also a little bit better brake tackle. He also has power-up, this card is very solid especially when your next-gen power banks are insane. This card is a beast.

96 base speed, Edgerrin James'll get 99 on a non-theme team, six foot two, 96 acceleration, 96 agility, 95 carryings, pretty good catching it in 80, high change of direction, pretty good trucking and brake tackle at 95. another all-around running back you’ll see in the game. Edgerrin is the only one that's hit 99 speed out of these players so far and has pretty similar stats everywhere else. The carrying is great, Edgerrin James seems like he gets caught a lot though, despite being 99 speed. But It's common among the running back. When he first came out, he was about 350k 400k from the training varieties. He’s getting reduxed soon if not already. If you do want to save for him, go buy it now.

As a 98 overall player, he’s a power back. 5 foot 10, 96 speed, so he'll get 99 for you. Pretty low on agility, but it’s almost unnoticeable on him. He's more of a bigger bruiser back, one weight off of being able to air truck. When you look up his weight online, it says he was 245 pounds, so they cheated him out of one pound they know what air trucking is. The carrying is super high 97, he will never fumble. Change of direction at 90, 99 trucking, and 98 brake tackle. The last two both go up to a 99 when you do hit that power up on him. And he's a 99-speed power back. he's Derrick Henry without the air truck.

You'll notice Derrick’s stats don't stack up to a lot of these other players, but Derrick Henry can air truck and that is a big thing in the game right now. A lot more people use their Henry even in passing situations, they'll throw the flat air truck for 10. He has a power-up, he'll get you up to 98 speed. He also has decent acceleration, the carrying is high, 97 trucking, and 98 brake tackle. The biggest key component of this card is the 245 pounds achieved. He has 247 and he's tall. he is still the best card in the next-gen by far because he's the only one that could air truck.

A six-foot-one running back that gets 99 base speed, 97 acceleration, 94 agility, good carrying, catching's a bit low at a 70 but still solid. Good change of direction 94, brake tackle, and trucking are the same as Derrick Henry. it seems he breaks a lot of tackles. he is probably the best actual front force runner in the game, literally run the ball, Herschel Walker probably is the best statistically in the game. Honestly, this card is broken in theme teams as well, because you can get that caught up in these teams. His speed already will hit that 99 non-theme teams. Power him up, have the sprinter on him, easy 99 speed with the 98 trucking, 99 brake tackle. There's not much more you could ask for in a running back, he's a golden ticket.

As most of you know, he can hit that 99 speed, 99 acceleration, 99 agility when powered up, he has great change of direction. But catching at 80 is still very good especially when you're that fast as a running back. The carrying is a bit low, but it will get up to a 93 for you to power it up. He gets high brake tackle too, he does break a lot of tackles, that's why a lot of people do love him. He's not a player that can make you miss, he'll break a couple too and break one out.

The biggest thing about Kamara being the best running back is his archetype at receiving back. He has a 99 base speed on a non-theme team when you do power them up and use sprinter, 97 acceleration, 98 agility, high carry 93, catching almost a 90 on a running back. Change of direction 97, trucking at an 89, and then the brake tackle at a 99 when powered up. It is crazy how good this card truly is. 88 medium route running, short running 91, deep route running 84. If you truly wanted to and you want to come on, another one he could play wide receiver for you. That's how good this card is super fun to use. 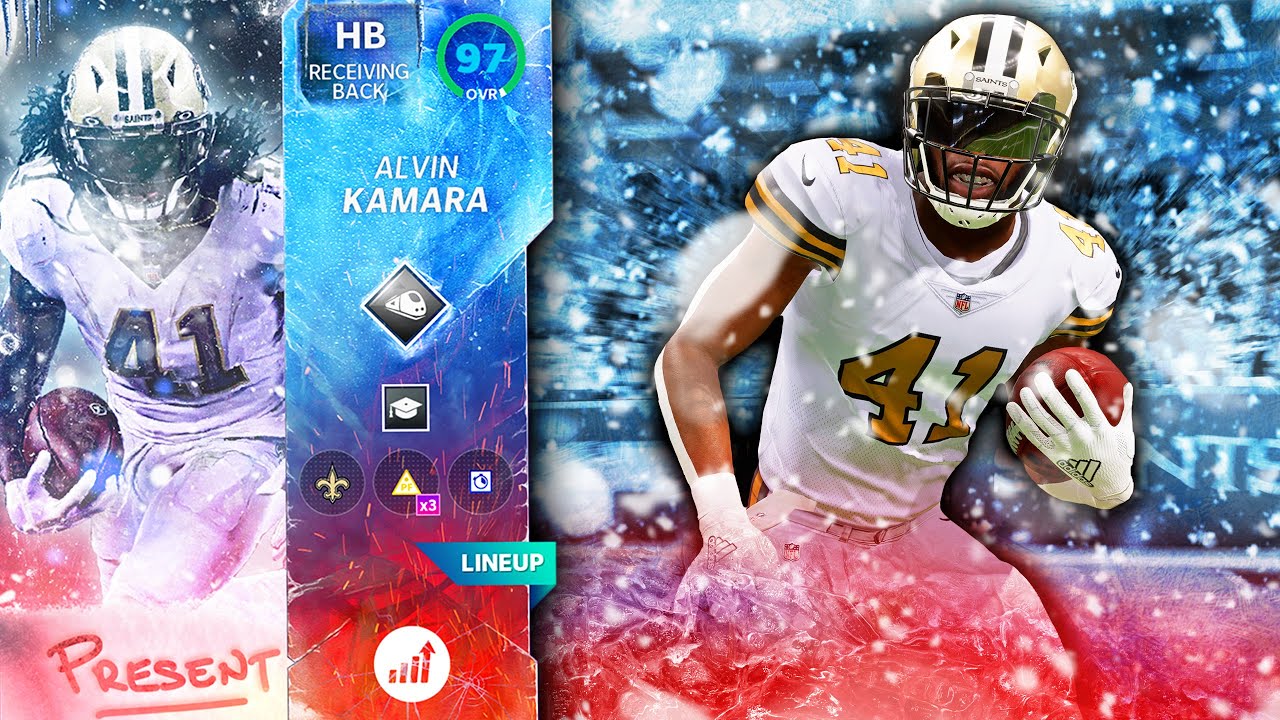